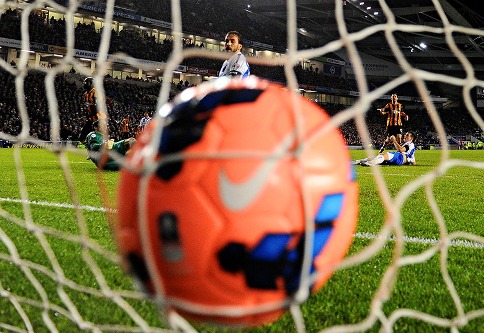 Poor performance all round.

Behind the rickety not-so-old changing rooms at Mersey Road a tractor was chugging back and forth across a stretch of land that used to be elevated, if memory serves, and covered in bushes and brambles and foliage. It appeared to be a Komatsu, and the expanse of brush it had cleared and levelled was easily capable of accommodating a third football pitch, which is interesting, while at the other end of the venue, bordering the allotments, a lone labourer was ignoring the South Liverpool Cup matches taking place nearby and pruning back weeds and nettles with some hedge trimmers, which might well have been Bosch. All in all, it was some nice landscaping.

The Liobians-Convo game couldn’t compete with action like that.

In fairness, the game couldn’t compete with people walking past in the street, humming, as it was utter dreck. Most of it was spent outside the penalty areas, with both teams continually stringing no more than two or three passes together before either gifting possession to their opponents with dreadful kicks, or just hoofing the ball into empty space or off the pitch. There was rarely any enthusiasm to get out of second gear (there wasn’t much enthusiasm to get into it), and for far too much of the tie pretty much everyone on the pitch looked like they were just going through the motions; even the Mersey Road midges, usually the bane of those watching on the sidelines, seemed negligible and uninterested. The whole thing was, as one unimpressed observer put it, like watching French cinema, only without the subtitles.

There were a handful of ‘highlights’ during the ninety minutes: most of the defending was fairly decent (alas – a bit of defensive incompetence might have livened things up), and the two goalkeepers did themselves justice on the rare occasions that their opponents actually fired off some shots and got them on target. The only Convo effort to hit the mark was from Jamie Long and necessitated a fine two-handed save from the home side’s #1, while Jack Morgan in the visitors’ nets was called into action in the first half (making a lovely “Oof” noise in the process), and also pushed a rising pop onto one of his posts in the second – three different Liobians players then ran in and tried to score with the rebound and subsequent loose balls, but all their attempts were just dreadful, posing more threat to each other and the tractor driver on his break in the distance.

Ahead of their aquamarine-shirted #1, and decked out in stripes of similar-blue and white, the visitors had retained the 4-5-1 formation so favoured by the old regime and began with new captain Jon Welsh partnering his brother, Andy, at the heart of the defence, and Andy Greene and John Farrell at left and right back respectively. In midfield Long (J) and Nottinghamshire’s Sam Askew were on the flanks, with Chris Barlow, Ollie Sawle and Anthony Lewis in between, while Mike Kent was the lone forward. The only substitute at the start of the game was seventeen-year-old Chris Grugel (he made his bow midway through the first period at right back, with Farrell moving up onto the wing to replace the uninjured Askew: “I’m just fucked”, the hooked newcomer admitted during a debrief on the sideline).

With the evening sun casting lengthening shadows across the pitch, Convo had begun proceedings by defending its river end (the end where the guy with the trimmers was) and it was clear pretty quickly that it was very much a battle of equals, admittedly in the sense that Liobians are a poor team while Convo were putting in a poor performance; far too many of those in stripes had their feet up as though it were still mid-summer. Matty Long – once thought to have been banished to Old Xavs – injected a modicum of urgency when he turned up, nettling the home side’s right back before he’d even stepped onto the pitch as a half-time replacement for the work-bound Farrell, but even he quickly slipped into default mode and started wasting promising moves by shooting from miles out as though he’d never been away.

Chris McNally showed up to see how the Firsts were getting on without him, midway through the second period, and an awful Sawle ‘karate kick’ shot must have reassured the erstwhile captain that his Convo legacy will live long, but things were equally as dismal at the other end of the pitch where the closest the game came to a goalmouth scramble – Action! – which seemed to go on in slow motion forever, left everyone scratching their heads as to how the ball had stayed out of the net and why it had taken the visitors so long to clear their lines; Welsh (A) whistling to himself as he sauntered up the pitch in the immediate aftermath of the shambles summed up the general listlessness of the whole game (all the club secretary was missing was a long blade of grass dangling out of his mouth). And one of the green-shirted players trying to persuade the referee (who should have been paid a boredom bonus) to award his side a corner (that never was) because, “It brushed his shorts”, left your correspondent rueing the fact that the nearest pub was miles away.

Having spent the time since arriving dishing out snippets of his acerbic less-than-wit from the sidelines, McNally was sent on up front for the final ten-or-so minutes, introducing that special brand of ineptitude of his to an already tedious game and sending out a message from Welsh (J) that Convo had settled for the draw. They still could have won mind, as both Longs had chances in the closing stages, but both sent their shots from inside the penalty area high over the Liobians crossbar, the one from Jamie being consoled with a preposterous call of “unlucky” from one of his team mates.

The final moment of what passed for interest on Tuesday evening involved a minutely promising chance for the home side that was sliced out of play for a throw in by one of the guys in green, with no one near him. It summed up the tie in microcosm, and thankfully the referee put everyone out of their misery moments later with the full-time whistle.

It wasn’t so much one for the purists as one for the out-and-out masochistic, although vice-captain Kent managed to offer up a redeeming slant on proceedings after the match: “Last season we’d have lost that 2-0” he suggested, without meaning to imply that not doing so was because he is now on the committee. Greene also offered up a soundbite (allowing this report to be padded out a few words more), claiming, “I find it hard playing out from the back.” Pick an occupant of just about any other position on the pitch on Tuesday and you’d have got someone who would sympathise.

The all-round awfulness of the game is a little understandable as it was the first of pre-season, and competition-wise both teams live to fight another day – but let’s never mention this atrocity again.

Man Of The Match: Grugel. He’s still of slight frame and looked nervy to begin with, but he grew into the game and put in a decent performance despite a middle-aged man on the sideline consistently shouting at him. A promising debut, and hopefully we’ll see more of him in the future (mind you, after this rubbish you wouldn’t be surprised if he was never seen again).